The link to the github repo with the code: link.

Prometheus is an open-source project which is both a monitoring system and a time-series database. It’s a popular choice for monitoring services, for example, it can be used to monitor metrics like CPU usage, heap consumption as well as business logic events (more on that later). Its time-series database also supports labels (e.g. metrics can be classified for example by mobile/desktop, client type etc.). Additional features include:

Prometheus uses pull model to get metrics data. This means that a server runs on the same hardware as your application and exposes a REST endpoint which Prometheus instance makes requests to, based on the set interval (by default 15 seconds). Push model is also supported however it’s recommended only for very specific scenarios when pulling model may miss the actual events (for example missing a rare business logic event).

Grafana is an open-source project which provides great visualizations for projects like Prometheus. There’s a nice Grafana tutorial here.

Below I will show how to set up Prometheus, Grafana and a simple server application in order to visualize Prometheus data. Full code of the app can be found here. First let’s create a very simple NodeJS server app. It will implement /metrics route which will return metrics in Prometheus format using prom-client NPM package (by default Prometheus pulls from /metrics endpoint but this can be changed) and /home route which would contain business logic:

Supposing the app is running locally at localhost:3000 if we access the app at endpoint localhost:3000/metrics the following response will be received (only 2 metrics are displayed for brevity, the actual output contains more):

As can be seen one of the metrics is called process_cpu_user_seconds_total and its value is 0.017604. HELP explains the meaning of the metric while TYPE mentions the type of the metric which is a counter. Prometheus supports several types of metrics 2 of which will be covered in the post:

For the purposes of the tutorial we’ll create a custom counter: the number of requests to /home route:

The line homeRequestsNumCounter.inc() increments the custom counter each time a new request for /home is received. Let’s make a request to localhost:3000/home so that when we get Prometheus stats at localhost:3000/metrics we can receive the following:

Great! Now what is left is containerize our server and add prometheus.yml config. Prometheus supports targets auto-discovery however for simplicity purposes the connection details of our app target can be configured in a configuration file prometheus.yml:

Full setup including the application code and docker-compose.yml can be found here. If docker-compose up is run three services are available:

Under metrics enter up{job="my_app"}. Each Prometheus target is called a job and the query returns 0 if the application is not responding, else it returns 1. The job can contain multiple targets, for example, there could be a producer and consumer microservice as part of the same job. up query is handy to set up an alert to notify if a service is down. This panel can be called Uptime.

Now we can see the heap usage graph:

Because counter metrics are always increasing such graph will not be very informative. That’s why Prometheus provides rate and irate functions. rate calculates the per-second average rate of increase of the time series in the range vector. Let’s set the metrics query to rate(home_requests_num{job="my_app"}[5m]) * 60: 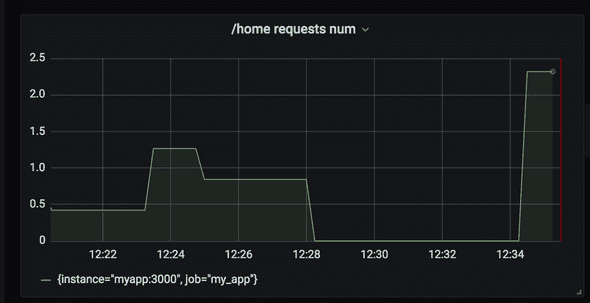 The graph now indeed provides some insights, like for example that at 12:34 there was a spike in requests. By default rate function calculates the rate of increase per-second that’s why in the query above the result is multiplied by 60 so that we see the stats per minute. In addition [5m] means that the rate of increase over the last 5 minutes will be calculated.

There’s also irate function which calculates the per-second instant rate of increase of the time series in the range vector based on the last two data points. It can be used for metrics which have sudden spikes of activity (like CPU activity) which rate will smooth out because rate calculates an average over an interval which is usually a couple of minutes. In practice however because irate calculates rate of increase based only on the last two data points it can also miss the spike event. The query would be:

None of those functions is perfect. This post recommends using intervals to catch sudden spikes:

The problem with interval is that it currently can’t be used with alerts.

In Grafana multiple queries can be added in the same panel, so let’s compare the results of rate/irate and interval query: 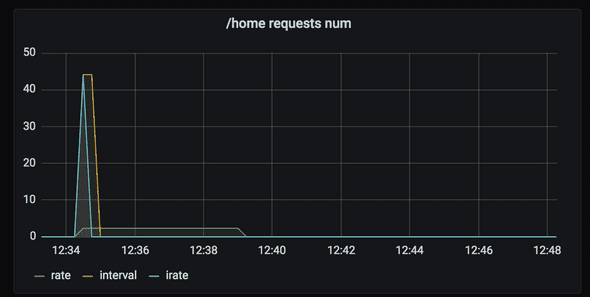 As can be seen in the screenshot both irate and interval show a sudden spike of requests more clearly than rate.

Regarding counters and gauges it can clearly be seen that counters are more complicated that gauges because rate functions are usually used to make counters meaningful. This means that if a metric can be represented as a gauge it certainly should be implemented as such.

I hope the above introduction to Prometheus and Grafana was helpful. I found this link very helpful to better explain rate function, this link explains irate in more detail while this article compares rate and irate.